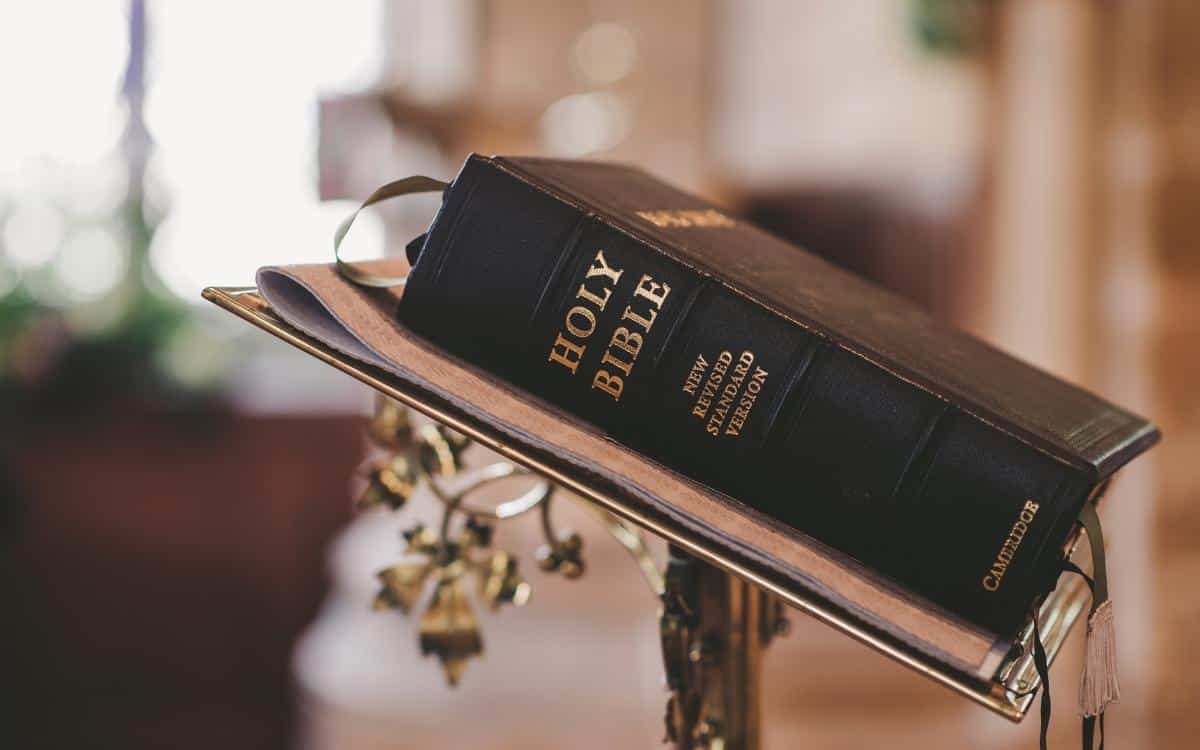 Divorce is still a taboo subject in some religions.

Although most Protestant varieties of Christianity have allowed divorce for centuries, the Catholic Church still only sanctions annulments for specific circumstances, such as infidelity.

But what does the Bible say about divorce?

The Old Testament comprises the first half of the Bible. The followers of Judaism use the volume as the Jewish holy book, sometimes referred to as the Hebrew Bible or the Tanakh.

Most of the dictates in the Old Testament became obsolete when the New Testament went into effect.

But that doesn't mean the references to marriage and divorce in the Old Testament are useless.

They informed the New Testament writers' views, meaning that we can see direct connections between the Old and New Testaments.

Let's go through the most important verses about divorce in the Old Testament. We'll be using the King James Bible as our primary source material.

“Therefore shall a man leave his father and his mother, and shall cleave unto his wife: and they shall be one flesh.”

Genesis lays out the foundation for marriage in this verse. The passage says marriage is a compact between a man and a woman. When two people agree to this compact, they become one, joined in unity forever.

“But every vow of a widow, and of her that is divorced, wherewith they have bound their souls, shall stand against her.”

Numbers describes the suffering of the Israelites after they escaped from slavery in Egypt. During this time, many men died, leaving their wives or daughters with a male companion.

In this verse, God says that a woman who gets divorced or becomes a widow should return to her father's home and protection.

“And, lo, he hath given occasions of speech against her, saying, I found not thy daughter a maid; and yet these are the tokens of my daughter's virginity.

In this verse, God dictates that a man cannot falsely accuse his wife of infidelity or unchaste behavior before marriage.

If he does, then he is not eligible to demand a divorce from her. In fact, the elders of the community will punish him.

“When a man hath taken a wife and married her, and it comes to pass that she find no favor in his eyes because he hath found some uncleanness in her: then let him write her a bill of divorcement, and give it in her hand, and send her out of his house.”

The classic Deuteronomy verses about marriage and divorce begin by saying that only a man can ask his wife for a divorce.

Most Biblical scholars agree that divorce was a common occurrence. Codes like these attempted to regulate it.

A man can demand a divorce from his wife if there is something wrong with her. People speculate that this could be a failure to bear children or because of some moral flaw.

A man can also demand a divorce when he begins hating his wife for an action she took.

God does stipulate that the man must give his wife notice of the divorce in writing. He also demands that if a man divorces his wife, he cannot remarry the same woman.

In the eyes of God, it's an abomination.

“They say, If a man puts away his wife, and she goes from him, and becomes another man's, shall he return unto her again? shall not that land be greatly polluted? but thou hast played the harlot with many lovers; yet return again to me, saith the Lord.”

In this Jeremiah verse, God explains his reasoning for not allowing a man to remarry a wife he divorced. God says that a woman who has been with another man after divorce is not clean.

Therefore, she isn't fit to remarry the man who divorced her.

“Then said the Lord unto me, Go yet, love a woman beloved of her friend, yet an adulteress, according to the love of the Lord toward the children of Israel, who look to other gods, and love flagons of wine.”

Most Biblical scholars agree that the Hosea chapters describe the experience of Hosea and his wife. His wife committed adultery, and that resulted in a child. She then fled their marriage, but she ended up enslaved.

Hosea, commanded by God, then purchases his wife and restores her to her place as his wife. Hosea's chapters indicate that even in cases of extreme hardship, God wants to see marriages persist.

Read More: What Does The Bible Say About Dating A Non-Believer?

With such a lengthy period between writings, the views surrounding divorce are much different.

For example, although the rules surrounding divorce are stringent in the Old Testament, many passages in the New Testament outright ban the practice.

Let's go through the essential verses concerning divorce in the New Testament. We'll also discuss the primary differences between the Old and New Testaments.

“Then Joseph, her husband, being a just man, and not willing to make her a public example, was minded to put her away privily.”

In the opening verses of the Gospel of Matthew, he examines the lineage of Jesus' ancestors. He also scrutinizes the thoughts and actions of Joseph, Mary's husband.

When he found out she was pregnant, he thought about divorcing her within the confines of Hebrew law.

But he wants to divorce her privately. He wants a private divorce because he doesn't want to ruin her reputation in the community.

But, instead of divorcing her, he believes her account of the virgin birth.

The passage wants us to know that even when situations become tough, God wants us to persevere through his trials.

In this verse from Matthew, the author references the passage from Deuteronomy outlining the proper procedure for a man demanding a divorce from his wife.

But the addition at the end of the section is what makes it unique.

Instead of allowing the same procedure for divorce, the verse says that a man can only ask his wife for a divorce if she committed adultery.

The verse also says that a man who divorces his wife for any reason other than adultery is forcing her to become an adulteress.

The verse has two crucial implications. First, it says that divorce isn't allowed aside from rare circumstances. Second, a divorced woman, no matter the reason for the divorce, is the same as a woman who committed adultery.

That means more responsibility is on the men in the situation. They must marry a woman who they envision staying with forever. If he doesn't, he'll condemn her to the fate of an adulterous woman.

“And the Pharisees came to him, and asked him, Is it lawful for a man to put away his wife? tempting him. And he answered and said unto them, What did Moses command you?”

The Gospel of Mark references many elements from the Old Testament, even disregarding their demands in some cases. The passage cited here isn't the chapter in full, but it explains the direction of the verses.

The chapter attempts to reinterpret the codes and laws given out in the Old Testament. By talking about Moses' commands, the Gospel of Mark references the Old Testament's thoughts on divorce.

The verses say that although the Old Testament says men can demand a divorce by giving their wife notice in writing, God's will has a new interpretation.

The text says that a man cannot demand a divorce from his wife, other than in cases of adultery. If a man asks for a divorce, he forces his wife into the life of an adulteress. To God, that is a grave injustice.

The Romans chapters in the Bible explain how people of any faith can accept God's covenant, on the condition they follow God's commandments.

Faith in Jesus will bring everyone together, even those from other faiths or ethnicities.

One of those commandments concerns proper marriage. The Bible says that people can only get a divorce when the other partner commits adultery.

The only way a woman can marry a new partner is if their original husband died.

“And unto the married I command, yet not I, but the Lord, Let not the wife depart from her husband: But and if she departs, let her remain unmarried, or be reconciled to her husband: and let not the husband put away his wife.

But to the rest speak I, not the Lord: If any brother hath a wife that believeth not, and she is pleased to dwell with him, let him not put her away.”

Biblical scholars attribute the First Epistle to the Corinthians to Paul the Apostle. He wrote the text after he founded the first church in Corinth.

After founding the church, he left but wrote the letter after finding the Corinthians were acting in an untoward manner.

Paul explains that there are no prohibitions against interfaith marriages.

Instead, Paul says that we should treat interfaith marriages just like marriages within the Christian community. The same regulations concerning divorce apply in these marriages.

But the chapter goes on to say that if an unbeliever abandons their spouse, the believing spouse is allowed to remarry.

Since one spouse didn't believe in the covenant between God and the people on earth, the believer shouldn't be punished for their spouse's defiance.

“The wife is bound by the law as long as her husband liveth; but if her husband is dead, she is at liberty to be married to whom she will; only in the Lord.”

In this verse, Paul is outlining the only way a woman can remarry. A woman can only remarry if her husband died. If her husband dies, any subsequent marriage won't be adultery. But if a man divorces his wife, then any new relationship will be adulterous.

“Marriage is honorable in all, and the bed undefiled: but whoremongers and adulterers God will judge.”

Some Biblical scholars believe the Hebrews section of the Bible was written in an attempt to convert the Jewish population of Jerusalem.

The section describes how the new covenant with God supersedes the old covenants in the Old Testament.

In this particular verse, the author is showing the similarities between the Old and New Testaments in an attempt to attract Jewish followers.

The same laws concerning adultery from the Old Testament are also found in the New Testament.

God ordained marriage as a sacred act. It is an honor to be in a marriage, and to disrespect that honor by committing adultery is a serious offense in God's eyes.

The Bible on Divorce

So, what does the Bible say about divorce? The Bible is a diverse document that displays various views on several issues, but divorce is a rather clear-cut topic.

In the Old Testament, there are four reasons to get a divorce. They include:

The New Testament has more stringent rules concerning divorce. People can only demand divorce in cases of adultery or abandonment by an unbeliever.